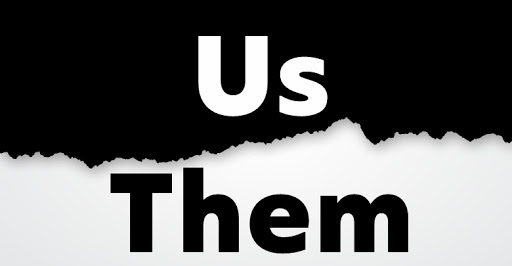 Grant Samms referred to otherism as “the single most dangerous idea in the world”.  He defined it as: the exclusion of a person based on their perceived diversions from an acceptable norm.[1]

Ralph Waldo Emerson used it to describe the process by which an individual is depersonalized or alienated due to their place in society.[2] This alienation can be embodied as prejudice against the other.[3]

Otherism is Us vs Them‍

There are many examples of this mentality having disastrous consequences.  During World War II, American culture demonized the Japanese publicly to justify the mistreatment of American citizens with Japanese heritage.  This included physically rounding them up and putting them into internment camps for fear of espionage.  To use the word demonize is no exaggeration when government funded caricatures portrayed Japanese people as fanged, sometimes red-eyed and un-human.

Most human atrocities in history started with ideas meant to dehumanize some minority group whether social, racial, ethnic or religious.

While any group not conforming to the norm is vulnerable, it is useful in our context to highlight the plight of law-abiding plural families.  Today it’s still considered to be socially acceptable to demonize plural families or polygamists here in Utah.

One example is the TV series ‘Escaping Polygamy’ which was used by activists to create fictional escape scenarios and present them as reality TV.  These depictions were described by victim advocates on both sides of the polygamy issue as “exploitative and damaging” to the victims involved.[4] The shows “stars” are victimized by the producers; many being tricked into dismantling their social support structures while in a vulnerable state, receiving only a meager sum of money (between $2500 and $5000) in return.

Michelle Mueller, a researcher from Santa Clara University in California, calls the series “sensationalized TV” and cites its use of “atrocity tales” to reinforce stereotypes and demonize what most would consider regular everyday actions when occurring in plural families.[5]

Many other examples of dangerous caricatures exist and are used to isolate people in plural traditions.  Media coverage often presents several outlandish caricatures of intrigue, abuse, fraud, etc, many of which are loosely based on hearsay, random news clippings and urban legends.  A handful of loosely used terms serve as vague scapegoats for anti-polygamy activists when they do not have any specific action to target.  These activists want the audience to turn off their cognitive facilities and stop asking questions.  “Trust us, it’s just bad.”

To be clear, there is no way to justify fraud, crime, or abuse.  Where abuse exists, there are laws to deal with it, and those laws should be enforced equally without regard to whether the individual belongs to a plural family or not.

The ability to access education for plural families continues to be under attack as is now happening at a charter school in West Valley for its perceived connection to plural traditions.  Despite this challenge, urban polygamists, especially in the last 25 years, have become more educated in spite of social stigmas that held back their parents and grandparents.

Because of stereotypes and otherisms, plural families are left more vulnerable to predators, whether in or out of their own ranks.  When activists, predators or con-men, abuse or defraud plural families, law abiding people from these traditions are victimized twice.  First by the actual abuse, and a second time by the public as it rushes to re-enforce the stereotype and project the bad acts onto every individual from the same tradition.

Many, including media outlets, use the excuse of fraud, abuse or the threat of extremism to justify singling out or broadly mistreating plural families, most of which have not been implicated in any crime.  This excuse falls flat when we realize the data simply does not support the narrative of widespread fraud or abuse for most plural families.  Criminal incidents are no more prevalent in plural families than for mainstream monogamists.  In most cases they are less prevalent.

Another popular excuse for bigotry focuses on the possibility of children being mistreated, married under-age or “brainwashed”, arguing that the wellbeing of children born into plural families is compromised.  In cases where children do require protection, most plural families support going to the proper public and social services where necessary.  Plural marriages for individuals under 18 have been prohibited by most plural communities, including the DCCS.

So, if othering of plural families is not about preventing abuse, and it is not about protecting children, what is it about?  At its core, all that is left is deeply rooted personal or religious prejudice against a group that defies social norms.

Isn’t it time to start judging the person, or the family by their individual merits regardless of their personal choices to live plurally or not?