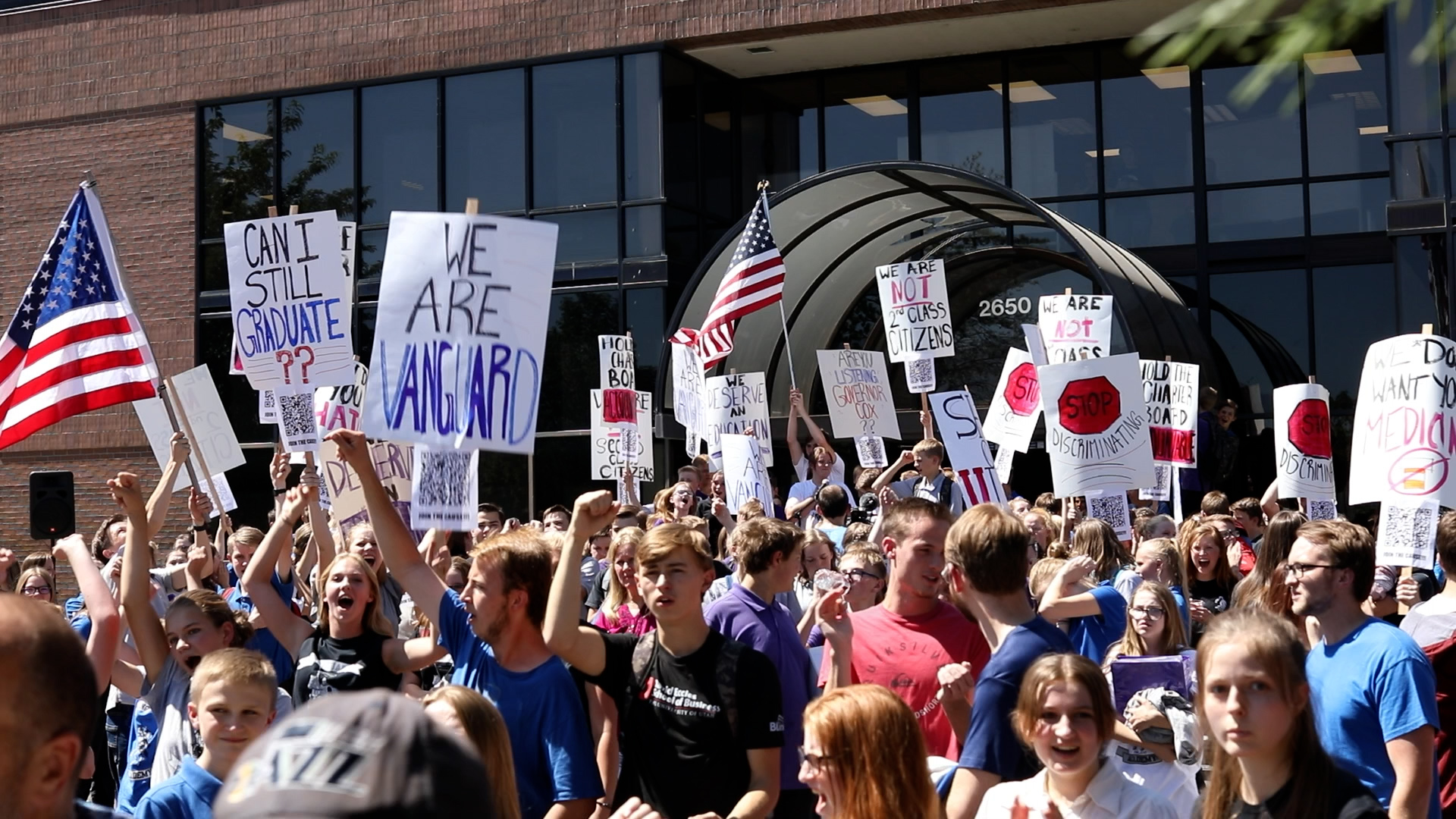 On Friday, September 2, alumni and students of Vanguard Academy in West Valley, organized a student rally in response to the SCSB’s vote to remove all 9 of Vanguard’s board members due to their affiliation with the DCCS. At its peak, the rally was attended by as many as 1,700 people consisting mostly of alumni, students, and parents protesting the discrimination against DCCS members by the SCSB.

Event organizer Breanna Jenkins, who graduated from Vanguard Academy in 2021, led the students as they walked out of Vanguard’s building around noon. Attendees marched to Redwood Road before returning to the school’s east side carrying signs that read “Are you listening Governor Cox?”, “Shame on Utah!”, “Can we still graduate?”, “Why do you hate us?”, “We don’t want your medicine” and others.

Jenkins, who spoke to the crowd stated,

“We as citizens of the United States of America have rights to a fair education! The mission of the State charter school board says we believe every student has the right to an education, one that meets their unique needs.  They are supposed to protect us, not hate and restrict us!”

Rally-goers circulated a link to a petition by Vanguard parent Michelle Johnson, who spoke and was in attendance. Johnson's petition calls for the removal or resignation of SCSB board members Bowles and Phillips as well as SCSB Executive Director Jennifer Lambert.

See the full text of the petition here

The rally continued until approximately 1:30 pm, when Jenkins led the students in singing the Star-Spangled Banner before returning to class.

“From 12 to 1:30 [Friday], there was a student rally, which was organized by a group of parents and alumni in response to the discriminatory action taken by the state charter school board in their last meeting.  I support the freedom of the parents, students, and alumni to voice their concerns over what is going on with their school.”

Fox 13 reporter Adam Herbets continued a pattern of misrepresentation of plural families in a headline that reads “‘The Order’ holds rally to try and save public school run by polygamous sect”, taking credit away from student and alumni organizers.

Fox 13 producers blurred QR codes linking to the parent petition circulated at the rally, which they did not mention.

Additionally, Herbets claimed in comments to users on Facebook that he attended the rally even though individuals submitted photos to DCCSOCIETY.ORG showing Fox 13 photographer Paul Hanke still waiting for Herbets to arrive long after the rally had ended.